Upon arising from a great night of sleep, Victoria and I enjoyed breakfast with Victoria's Aunt Elvira. We departed late morning and made our way a few miles to Don and Paula Henry's home in Clearwater KS. Don mentored me in the early 1980s when I lived in Wichita KS. We met their daughter, Leah, along with her three children and had lunch with all of them. It was early afternoon by the time we said our goodbyes and headed south on Interstate 35 toward Oklahoma City. 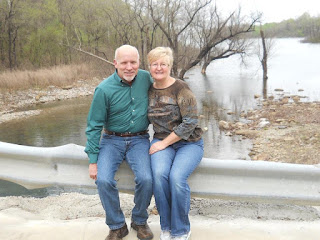 When we arrived in Oklahoma City, I took Victoria to see the National Memorial. Here she is pictured with the Survivor Tree, a 90+ year-old American Elm which survived the blast. 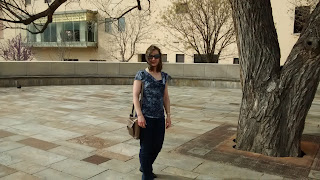 And here is a short video I shot of the Memorial from the same spot.

After we visited the Memorial we continued south until we made it to Ardmore OK where we spent Wednesday night. Into the state of Texas on Thursday!

Posted by Barak Strickland at 10:49 PM